A Day in a Traumtized Child's Life

I can only imagine what it feels like to be Teddy. He has formed the tinies bit of attachment but for the most apart lives in a state of fight flight and freeze   I'm going to go through a day of Teddy's life as I imagine he is thinking/feeling. I have been his mom for almost 12 years. He is now 17 years old, 18 soon.

"As Teddy wakes up he wonders if anyone has been in the room during the night and messed with his stuff. He bets his younger brother was and wonders what he took. He imagines they are all out there hogging all the cereal and there will be hardly any left for him.  He lays back down as it feels safer in his bed and wishes he could just stay there. His room is the only safe place because he has prepared many sharp objects to protect himself in case of intruders. He checks his windows regularly for strangers outside.  Before he goes out for breakfast, he checks his wallet to see if it was moved or any contents are missing. He is sure he left it in a different spot last night so knows that someone was into it.

He comes out to breakfast and sees his mom, (me) who is the meanest woman he has ever known. And there are his siblings who only want to take his stuff and eat his food. He growls angry words such as "Get out of my way." to his brother and throws a dirty look at mom who says "Good morning Teddy." He answers with "I don't like this kind of cereal and you know it."

On his way to school his stress levels begin to raise. His siblings look at him in the car and he knows what they are thinking. They are planning to steal from him and he will be ready. He sees people in the cars around him and wonders if any of them are robbers. He is sure that guy was looking at him. He will be ready.

He pulls up at school ready for battle."


And so goes his day. How do we respond to this child who is angry? Remember that under the anger is fear or sadness. Address that instead. There are times with Teddy now where I can give no answer that helps. That doesn't mean he doesn't hear what I say.  As his parent, no matter how difficult he is, I have the responsibility to be a good loving parent, to set limits, give consequences, and pour out the love to this chld who tries so hard to be unlovable.

Labels: its hard to be them, Reactive Attachment Disorder

We are seeing a lot of old behaviors come back. That's hard. Thank you for reminding me again to never quit.

I could not possibly imagine living in that much paranoia!

Just wanted to say, your blog has been such an encouragement to me. My daughter has not been dx w/RAD, but she certainly has some attachment issues. We are seeing an attachment therapist, and he has been a great coach in dealing with her anger. We are also learning she has some sensory integration issues regarding to her vestibular (she's deaf and wears CI). It seems the more we keep digging for answers the more "stuff" we learn to work and deal with...never ending, or at least that what it feels like. Thanks for the reminders to never quit because there days I want to...
Mom to One Tasmanian Angel...

sounds liek a morning at our house. Christine said last week " the only thing harder than parenting them is being them" I think that is so true.

hi thanks for your post. I too have RAd children. I have done a few vidoes on it this week. Prayers, Jodi

Thanks to you all! I can relate to each of you. I need the reminder of unconditional love and hang in there. Thanks

I love him like crazy, but lately (will be 16 in three weeks)I wonder am I making a difference. My husband has had to find work out of state, therefore my cup feels very empty. 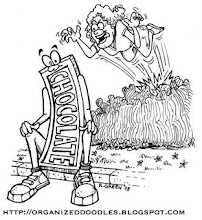